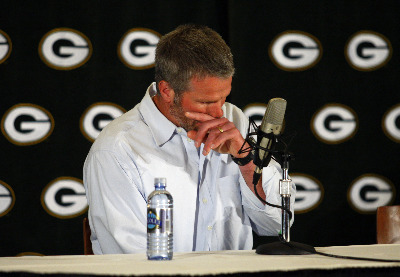 On March 4th, 2008, after an illustrious career with the Green Bay Packers, Brett Favre retired.

On February 11th, 2009, after an up and down season with the New York Jets, Favre retired, again.

On January 17th, 2011, after two years with the Minnesota Vikings, Favre hung up his cleats for the final time.

Today in professional sports it has become common for athletes to retire, and then come out of retirement. Whether this trend is due to a player’s sudden desire to play again or to gain financial assets, it has become somewhat normal.

But how can a player who is under contract with one team legally sign with another after coming out of retirement?

To find out we here at the Legal Blitz asked one of the must successful sports agents in the nation, JR Rickert. Rickert represents more than 100 professional athletes and entertainers, and has negotiated more than $250 million in professional sports contracts. His clients include New York Giants wide receiver Hakeem Nicks and Milwaukee Brewers outfielder Nyjer Morgan.

Rickert said that a player’s contractual availability after retirement depends on more than one thing.

“Most contracts have forfeiture clauses; if you retire before playing out the contract, you have to give back a pro rate portion of the signing bonus,” Rickert said.

Another main component of a player’s retirement in professional sports is each league’s collective bargaining agreement.

What this means is that unless the player returns to the same team, the player has to repay either any type of signing, roster, or option bonuses that would be gained in the remaining time left in the contract.

For Favre to sign with the Jets after retiring under contract with the Packers, the contract situation was less than ideal.

“Even if you retire, you have to be released or traded if you were under contract when you retired,” Rickert said.

This is exactly the position Favre was in. Favre asked the Packers for an unconditional release of his contract, meaning the Packers would completely release Favre and his contractual obligations keeping him from signing with another team.

As the situation unfolded, Favre was traded to the Jets for a fourth round draft pick. After Favre’s second retirement in February of 2009, he was still under contract with the Jets organization for another two months. For Favre to sign with any team again, he would have to wait for either a release, trade, or for the toll of the contract to end at the end of the league year.

In retirement for professional athletes, such as Favre, the contractual side can be very difficult.

Rickert said that in the end a player’s contractual obligations during retirement depend the league.